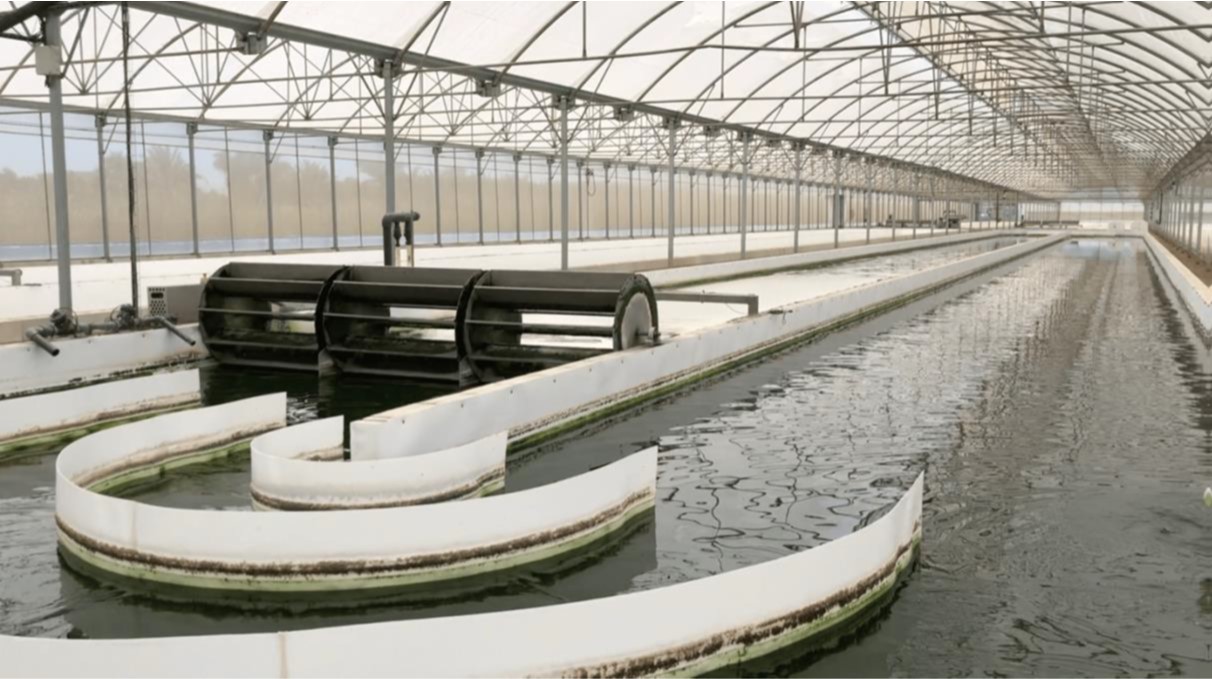 In the REALM concept, raceway systems are built next to greenhouses. In these open ponds, microalgae can be cultivated in a cost-effective way. Photo by Biorizon Biotech.

Freshwater supplies are declining worldwide, a situation intensified by global warming. Greenhouses and microalgae production, like many other industries, need to reduce their freshwater demand. By growing microalgae in the drain water of greenhouses, the overall fresh water usage can be reduced, and the water becomes cleaner. This approach can also result in new microalgal-based products for agriculture and aquaculture, generating extra income; in essence, transforming waste into value. A new research project aims to test this concept by developing new low-cost cultivation systems expected to cut the production costs of microalgae in half.

Faro, 02.08.22 – The United Nations forecasts that the global freshwater resources will decline by fourty percent until 2030. This will lead to a strain on fresh water supplies in Europe too. Southern countries, such as Portugal, Spain and Italy, are already experiencing water shortages, which are exacerbated by droughts as seen in the past months. Due to global warming, such extreme weather events will become even more frequent.

This urges the re-design of agricultural and industrial processes, which often require high amounts of fresh water. Growing one kilogram of tomatoes in greenhouses – although more resource-efficient than cultivation on fields – needs between four to twenty liters of fresh water. However, direct reuse of the drain water can spread plant diseases and destroy entire harvests. As of today, high-tech disinfection and recycling systems are still costly.

Run-off from greenhouses or improperly treated drain water can cause environmental problems. Nitrogen, phosphorus, and other nutrients added to the irrigation water for fast and healthy plant growth can be washed into rivers and lakes. Due to the high nutrient load in these waters, wild plants and algae grow excessively and quickly deteriorate the water quality. Dead zones arise in which only little oxygen is freely available to fish and other aquatic creatures – too little for them to survive.

Microalgae can help combat both of these problems. Instead of using pure fresh water, microalgae can be cultivated in drain water from greenhouses. This frees up fresh water for other purposes like crop irrigation or the production of drinking water. As the microalgae grow in the drain water, they remove the nitrogen and phosphorus therein. This prevents the accumulation of these nutrients in the environment, keeping clean fresh water bodies clean.

European microalgae researchers, agricultural producers and technology experts connected the dots and initiated the new research project REALM: Reusing Effluents from Agriculture to unLock the potential of Microalgae. They plan to join greenhouse farmers with microalgae producers in the most economical way.

“Recycling irrigation water is a cost. With microalgae, this cost can be turned into revenue,” explains microalgae specialist Alexandre Rodrigues from Necton, the company that coordinates REALM. “By having microalgae production facilities close to the greenhouses, microalgae producers will be getting free water and nutrients. They will clean that water and transform it into valuable microalgae, which can be used in innovative products to grow plants faster or to grow fish healthier.”

Microalgae are rich in essential nutrients and produce compounds that can boost the health of plants and animals. Together, greenhouse farmers and microalgae producers can grow microalgae to manufacture aquaculture feed or agrichemicals like bio-pesticides and bio-stimulants. As microalgae only need sunlight, CO2, water, and nutrients, their growth is highly environmentally friendly.

“The production of microalgae can be very sustainable. In REALM, we will use the drain water as a source of both water and nutrients. We will use the sun as the main energy source, and we will try to validate a direct air capture system that concentrates CO2 from the air. Because microalgae perform photosynthesis and transform CO2 into oxygen,” says biotechnologist Mariana Carneiro from Necton. “Microalgae can be a natural and sustainable source of interesting compounds, which is why we should keep exploring its potential and improving its production.”

Last month, the interdisciplinary team started working to make the REALM concept a reality. Within the next four years, they want to establish automatic, low-cost open pond systems that grow microalgae next to greenhouses. Sensors in the system will monitor the growth of the microalgae and the removal of nitrogen. The researchers anticipate to decrease the nitrate content in the drain water to below the EU limit, which is currently set at 50 milligrams per liter.

At the same time, the system is expected to reduce the costs of growing microalgae by up to fifty percent. According to the team, a production price of less than 10 Euros per kilogram (dry weight) is plausible. This is an important step forward for the industry. Reduced production costs can help microalgae producers reach more sectors and lower price markets. This can boost entrepreneurship to fully seize the potential of microalgae for biofuels, sustainable food and feed or medicine. Microalgae products are currently only available in niche markets. Today one can find microalgae in several day-to-day products such as smoothies and chocolate bars, but also in natural cosmetics. However, microalgae can contribute to healthier lives far beyond their current uses.

When greenhouse farmers and microalgae producers adopt the REALM concept, they can help each other overcome some of the biggest challenges they face today. Additionally, the liaison can increase their competitiveness in a sustainable way – for a better future in which freshwater is not a luxury item.

ABOUT THE PROJECT REALM
REALM is a European research project funded by Horizon Europe with 8 554 800.75 Euro (grant agreement number 101060991). It started in July 2022 and will run for four years. Centred around the European Green Deal, the focus is to unlock the potential of microalgae by growing them in drain water from greenhouses. This will reduce the environmental burden of greenhouses and the costs of microalgae production. A cheaper production price of microalgae increases the competitiveness of microalgae products and is going to boost new innovations based on microalgae.
The name “REALM” is an acronym that stands for “Reusing Effluents from Agriculture to unLock the potential of Microalgae”.

This site uses Akismet to reduce spam. Learn how your comment data is processed.