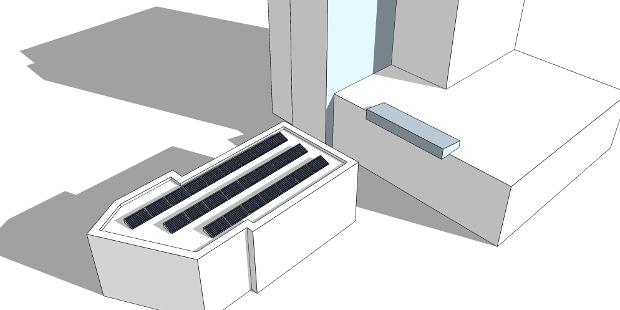 3D shading model produced by Decerna of the PV array design, prior to installation

The Staiths Café in Gateshead, engaged with Decerna via the Business Energy Savings Team (BEST) project to gain advice relating to their overall energy consumption and carbon footprint. The nature and size of the business meant they had little internal resource to fully appraise their energy consumption so the scope of the assessment was very broad from the outset.

A site visit was carried out which identified a number of possible opportunities to reduce energy consumption. A report was written which covered the main recommendations with a basic explanation of how they might be implemented, the approximate cost and savings of each energy saving measure. The majority of these were fairly modest and could be implemented by the client with little further assistance.

The primary recommendation was to install a flat roof mounted solar photovoltaic system for the purpose of reducing the café’s grid consumption. This had been considered previously by the client but they had been advised that nearby apartment blocks would create an unacceptable level of shading and render any such system unfeasible.

A 3D model of the site and surrounding buildings was created for the purpose of simulating the shading through the year. It was clear that from this exercise that shading was in fact not an issue for most of the year during working hours. A suggested system was sized to balance maximum annual generation against minimal export to the grid in order to give the greatest return on investment to the client. A simulation of annual generation was carried out for various scenarios to identify the most beneficial system size. An estimated capital cost, annual energy saving and greenhouse gas reduction was then calculated and incorporated into the report.

Following delivery of the report to the client and subsequent discussions, they made the decision to pursue development of this photovoltaic system along with an application for grant funding through the BEST project. Decerna continued to support the client through the process of applying for the grant, gathering quotations for the work and assessing the suitability of contractors and their proposals.

Based on the recommendations presented in the report and subsequent grant application support, a flat roof mounted solar photovoltaic system was successfully installed along with approval for 33.05% grant funding towards the capital cost of the project. Some of the other recommendations were also adopted by the client including minor lighting upgrades and improved thermal management of their refrigeration space.