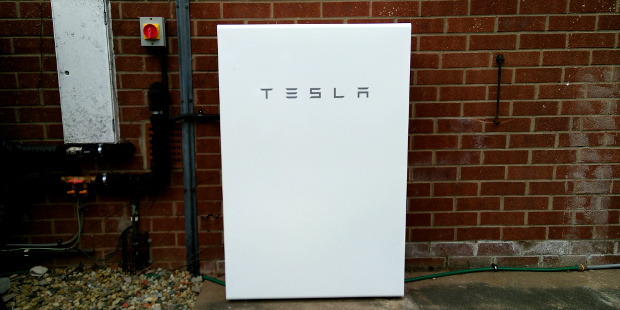 Tesla Powerwall – one of the types of batteries available for domestic batteries, Tesla also produce grid balancing systems as the Powerpack and Megapack. Note, we are not associated with Tesla.

Batteries are becoming increasingly important in the UK, as a necessary part to allow the transition through to 100% renewable energy.

There are various types of battery chemistries. In terms of the MW scale of battery, these are generally Lithium Ion based. Other technologies which are growing in importance include different types of flow batteries, such as vanadium based and zinc-based batteries.

In terms of grid scale, batteries are up to 49MW in size, and generally have capacity for between 1 and four hours. The 49MW limit is due to planning rules, which have recently changed to remove this barrier, and the ways in which a battery can be controlled as detailed within the Electricity Act. Grid balancing batteries make their money from a wide range of National Grid schemes, such as STOR, FFR, or the Capacity Market. The Capacity Market has undergone a long legal battle, due to the issue that it can be viewed as a subsidy for fossil fuel-based diesel generators or power stations, not just batteries.

Domestic batteries range from about 3kW to 5kW, with capacities ranging from 2kWh to 13.4kWh. There are new offerings from some companies that allow numerous domestic batteries to work together, like a massive distributed grid balancing battery. A domestic battery can allow a consumer to store their solar energy during the day, and then use this energy at night. However, it is very dependent on your electricity tariff to if this is actually worthwhile.

Businesses use larger batteries, in the range of 100kW to 250kW, which allow them to avoid using electricity at peak times, and also to fully utilise the renewable energy installations on their businesses.