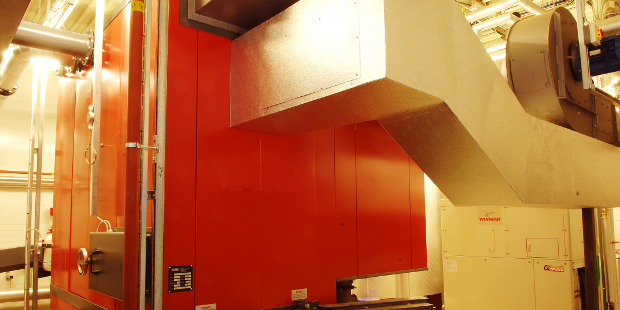 If the UK is to reach its target of ‘net-zero’ carbon emissions by 2050, moving away from its reliance on fossil fuels for heat and electricity is essential. As so many buildings are heated by mains gas, oil and LPG, a drop-in replacement for these boilers is highly desirable and biomass has been seen by some as one such option, which has had a wealth of support from government in recent years.
The term biomass covers a range of different technologies, which generally involve the combustion of biofuels such as wood, crops and waste organic matter. This material can be processed to varying degrees to create either solid, liquid or gaseous fuels. Most commonly the term biomass refers to the burning of wood-based fuels to heat water, which can be used for space or process heating or to generate electricity. Boilers designed for this purpose cover a large range of sizes and purposes, from heating small homes at just a few kW of heat output all the way up to large industrial processes requiring multiple MW of heat.

Biofuels are often classed as a ‘renewable’ energy source because the organisms that are harvested to make the fuel can be replenished and the CO2 emitted during combustion is reabsorbed during the growing cycle. This does not, however, tell the whole story and there are many factors affecting how sustainable these fuels are, including the energy and resources required to grow the feedstock,  process the material into fuel and transport the fuel to site. There are issues with land use, both direct and indirect. Additionally, in some cases the burning of biofuels can be more environmentally harmful than simply the CO2 they emit. They also produce varying levels of as airborne particulates, sulphur and nitrogen oxides and carbon monoxide, all of which are potentially harmful to the environment.

There is a great deal of research into what are termed “advanced biofuels”, which are usually based around microorganisms such as microalgae and bacteria. From this, liquid fuels can be produced (either through transesterification or hydrothermal liquefaction), or biogas from anaerobic digestion. In terms of liquid fuels, these canse be used for road transport, or possibly for jet fuel.

Biomass was supported very generously when the Renewable Heat Incentive was introduced in 2011. This resulted in a rapid uptake of the technology, in large part due to the attractive returns on investment that were possible early on in the scheme. Now that the RHI is less lucrative, biomass can still make economic and environmental sense, but not in all settings. Expert advice should therefore always be sought before embarking on a biomass project. Many factors need to be considered before a project is deemed viable, some of which are all too often overlooked. These include fuel cost, fuel source, fuel storage, reliability, maintenance and operating requirements, system efficiency, environmental impacts and planning restrictions.

Work Narec Distributed Energy has been or is involved with includes:

LCA of algae based biofuels